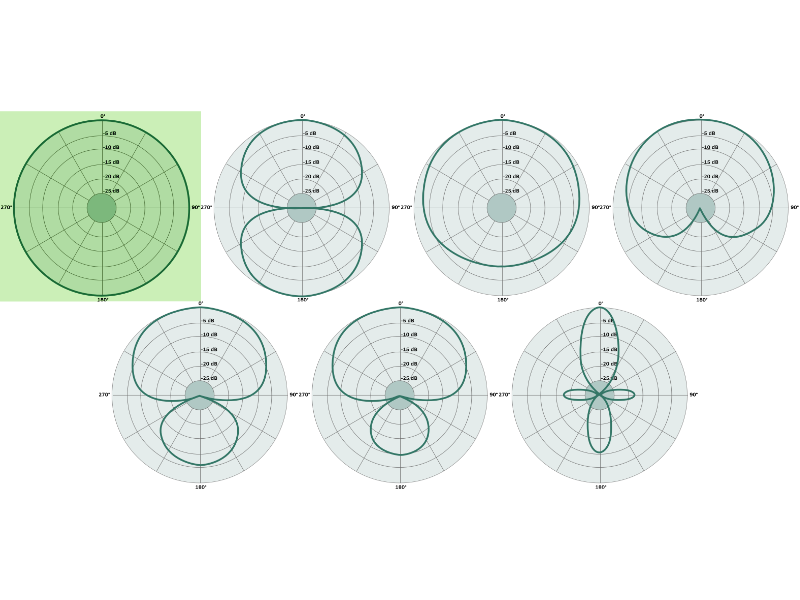 By choosing the right pattern, you can prevent unwanted sound sources from filtering into the signal entering your microphone. It also helps you to adjust the mix between the ambient and room sound, or it can change the frequency response as well as influencing the proximity effect.

How to read a polar pattern diagram?

First off, you may need to be able to read polar pattern diagrams correctly. It contains the necessary information that is needed to anticipate your recording results. Imagine a 360° field surrounding a microphone. The 0° mark lies at the front of the microphone and it is the angle at which the microphone is at maximum sensitivity. The circle scale consists of smaller circles, each representing a reduction in sensitivity of about 5 dB.

The decibel (represented as dB) is a logarithmic unit for comparing two values. So, should the specifications of a cardioid microphone indicate a rear rejection of 25 dB, this means that the most sensitive part is (0 °) and the least sensitive part (180 °) and they are being compared.

For pressure (sound), the current and voltage are +6 dB twice as high as the signal strength, +20 dB generates 10 times more signal. A more conventional rear rejection for the cardioid pattern is around -20 dB. So, the sound that comes from behind the microphone can be picked at a sensitivity of 1/10 when compared to the front signal.

What is an omnidirectional polar pattern?

1. Captures sound from every angle

The omnidirectional pattern is one in which sounds are captured from every angle. It captures sound from any direction. This is because it has the same sensitivity to sound pressure in any direction.

An omnidirectional pattern offers the flattest frequency response, best bass reproduction, and is less sensitive to wind or handling noise when compared to other polar patterns.

When recordings are made in a low sound room, the result may not be as satisfying as expected. In recording situations where the sound picked up are to be played using a PA (e.g. concerts), the feedback may be an issue.

Because the microphone body is not infinitely small, it tends to be in its own way when sound from the rear is to come in. This, therefore, can result in a slight flattening of the polar response. It increases when the diameter of the microphone (assuming it is cylindrical) approaches or reaches the wavelength of the frequency in question. What this means is simply that microphones with the smallest diameter offer the best omnidirectional properties at high frequencies.

When to use an omnidirectional microphone

Pros of an omnidirectional microphone

Cons of using an omnidirectional microphone

If you want to record something very specific and eliminate ambient noise, an omnidirectional microphone may not be the best choice for you.

Pay attention to your recording environment and avoid background noise as much as possible to avoid unwanted noise.