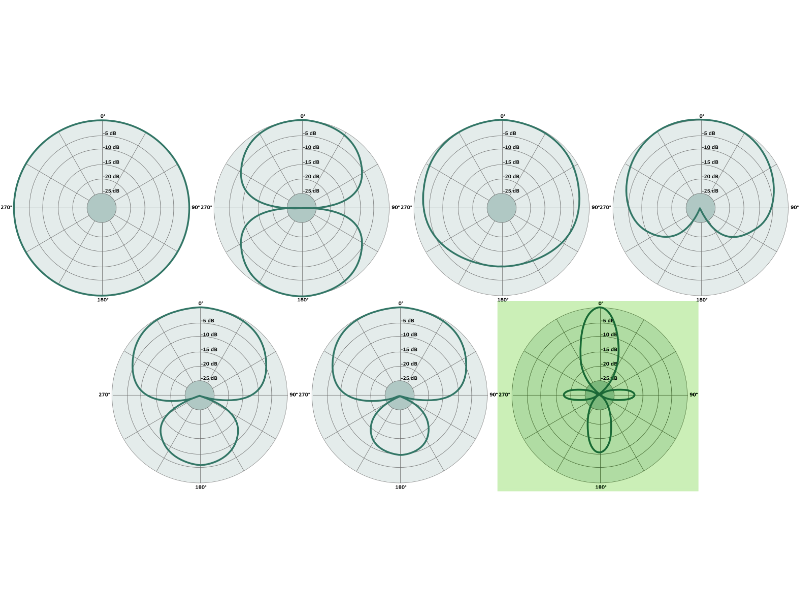 A microphone’s polar pattern is a way to display its directional sensitivity. There are some microphones with fixed patterns, while others can switch between quite several different patterns.

What is the Lobar polar pattern?

The Lobar pattern is a unidirectional pattern, which means it is more sensitive in one direction. This is indicated at 0° on-axis in the graph of its polar response.

However, that’s not all there is to it. The Lobar polar pattern has three other additional sensitivity lobes: one on each side (90° and 270°) and one at the back (180°). Though the lobes are less sensitive, they are however almost as narrow/directional like the main on-axis pickup.

A “weapon” that doesn’t shoot

Although the Lobar pattern is fascinating, it is above all, more theoretical. Most shotgun microphones have the front and rear lobes, however, only a small fraction of them is likely to have the side lobes of the “real” Lobar pattern.

The shotgun polar pattern is generally made from the super-cardioid or hyper-cardioid capsule, but it can only be achievable using a long interference tube that is fixed in front of the capsule.
The microphone has a long-slotted interference tube that works as an acoustic labyrinth right in front of the microphone capsule. The sound that is sent directly on-axis passes through the tube without an issue.

The sounds entering the tube from an off-angle do not find it so easy. There are slots in the tube which are designed in a way to phase-cancel different sound waves at different frequencies as the sounds move along the tube.

This reduces the pattern of pickup of an already directional super-cardioid or hyper-cardioid capsule, thereby turning it into a Lobar or a shotgun polar pattern.

The angle of acceptance of a shotgun microphone polar pattern quite depends on the length of the tube and some other design factors, this also includes the design of the microphone capsule itself.

When Should You Use A Lobar/Shotgun Microphone?

Shotgun microphones are often thought of as specialized or specialty microphones. While they excel in some situations, they are not even considered in many other applications. So, in this section, we will discuss in what condition or application it is best to utilize a shotgun or Lobar microphones, as well as those where it is not advisable to use these types of microphones.

Cons of using the shotgun or Lobar polar pattern