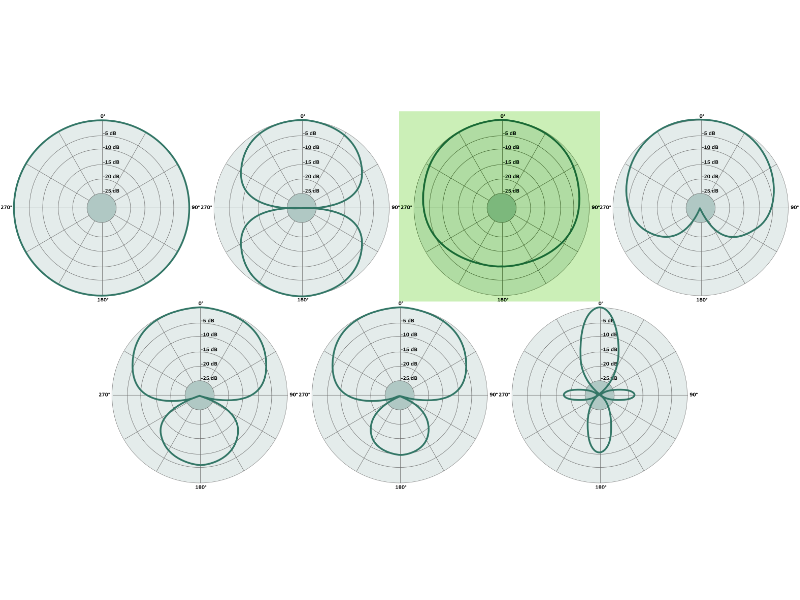 Directionality is the sensitivity of a microphone to sound, relative to the angle or direction from where the sound is coming from. Several directional patterns are available, and these are represented in graphs and are called polar patterns. The graph of a polar pattern shows the change in sensitivity 360-degrees around the microphone. This is as long as the microphone lies at the centre and the 0-degree point is in the front.

What is a subcardioid polar pattern?

Sometimes called the “wide cardioid”, the subcardioid is an obscure polar pattern. Its directionality is somewhat close to Omni, but not entirely, which gives a very natural and open sound that is suitable for low stage volume performance where a more organic sound is desired. This subcardioid polar pattern is also less sensitive to the proximity effect. This is especially true when it is in combination with a dual diaphragm. However, they are more prone to feedback. When considering subcardioids, think small acoustic low volume gigs.

As earlier stated, the subcardioid or the “wide cardioid” polar pattern is a less famous relative of the famous cardioid pattern. Knowing this pattern of microphones, as well as it’s pros and cons will surely help you choose and understand the right microphones to use, whether you are a professional or an amateur.

What can I use a subcardioid microphone for?

Since the subcardioid pattern is quite an uncommon microphone pattern, it will likely not be chosen for many applications by users. However, there are some cases where the use of a subcardioid polar pattern microphone does make sense.

The subcardioid pattern may be useful in any situation where a more directional microphone is required.

And of course, with those in mind, there are some pros and cons of using the subcardioid microphones:

Pros of using the subcardioid microphones

It is pertinent to note that the rear sensitivity lobe makes the placement of the microphones essential for isolating sound sources with subcardioid microphones.

The ideal subcardioid polar pattern characteristically has null points of sensitivity at around 127° on both sides of its on-axis (i.e. 127° and 233°). The null points represent the directions in which the microphone theoretically does not pick up any sound. This means that the sound will be greatly attenuated (especially if at high frequencies). The nature of the sound, reflections, and acoustics allows the sounds to enter the microphone from other directions, even if it comes directly from a null point direction.

Cons of using the subcardioid microphones