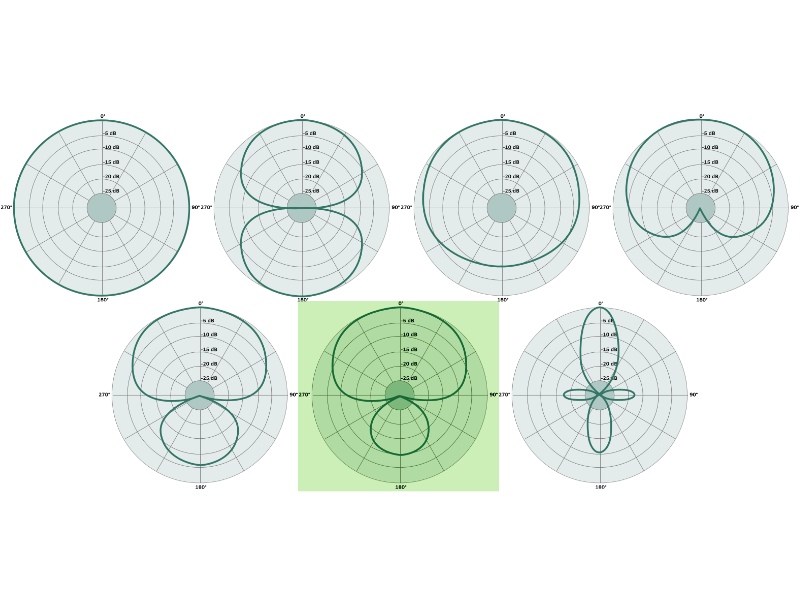 Polar patterns are often misunderstood by some who are not too conversant with them. So, what are polar patterns?

Polar patterns of microphones can also be described as their sensitivity to various sound sources relative to the angle or direction from where the sound is coming. In simpler terms, it may be expressed as to how the microphone “hears” sound from the different direction of projections. The most common of the types of directionality are as follows: Cardioid, omnidirectional, and supercardioid.

A supercardioid polar pattern microphone has a narrower or tighter pickup angle than a cardioid pattern, however, unlike the cardioid, it provides even a greater side or lateral rejection. But in this, it is somewhat sensitive to the sound sources directly behind the microphone. A supercardioid microphone provides better isolation from ambient or room noise and the nearby instruments. It can also be more resistant to feedbacks than cardioid microphones. However, for this to work well, the user must maintain a more consistent position which should be directly in front of the microphone.

What can I use a supercardioid microphone for?

Supercardioid microphones provide a narrower recording pickup than cardioid microphones. It also provides a stronger rejection of ambient noise. However, they may also pick up some sounds from directly behind the microphone. Consequently, it is important to properly position the monitor speakers.

Supercardioids are best when you want to collect individual sound sources in noisy environments. These types of microphones are resilient in their resistance to feedback.

They are useful in inevitably noisy environments when there is a need to isolate and pick a voice or instrument while the ambient noise is minimized. They are used by spies or eavesdroppers to listen to secret or distant conversations. To make it more directional, using a parabolic dish directed towards the microphone, can sometimes make all the difference. These types of microphones are rarely used in the studios. It is probably the most used in sports broadcasting where there is a need to get sound from the team on the field, especially if you cannot get a microphone nearer to them.

Cons of using a supercardioid microphones

As with the previous point, microphones are often less directional at lower frequencies. For the supercardioid microphones, this may mean there will be a transition to a cardioid or subcardioid polar pattern at the lower end of their frequency response. It works according to the principle of the pressure gradient.

It should be noted again that the supercardioid microphones (and all directional microphones) operate on the principle of the pressure gradient.